"Communicating with the dead has been a secret part of my life for many years." –Judith Fein

Judith Fein’s fourth deep travel memoir, HOW TO COMMUNICATE WITH THE DEAD AND HOW CULTURES DO IT AROUND THE WORLD, invites us along on her decades of investigations and explorations of the final frontier: Death.
For most of her life, Judith Fein has seen and heard dead people. Not all the time, thank goodness, or it would not leave much time for this prolific journalist to write about her soul-searching globetrotting with her ever-skeptical photojournalist husband, Paul Ross. "Judie and Paul" are the "Nick and Nora" of the travel adventure-supernatural set. She can see a ghostly figure in the middle of nowhere and believe it to be a specter. He can be right next to her, eyes huge, and afterward admit “maybe” it was real. Their yin-yang bonding and love adds to the delightful humor of this Odyssey. 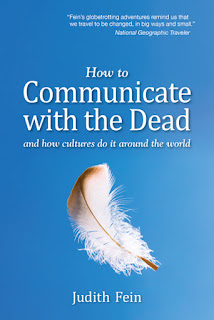 HOW TO COMMUNICATE WITH THE DEAD signals a coming out of the woo-woo closet for Fein. The Oxford dictionary defines "woo-woo" as "unconventional beliefs regarded as having little or no scientific basis, especially those relating to spirituality, mysticism, or alternative medicine…" Throughout her illustrious career as a journalist, Fein has occasionally penned articles about seeking healers and rituals in “exotic” locales; although mostly she has flown under the radar as a gifted intuitive herself. This book puts the spotlight on Fein’s spiritual truths as she has lived them, revealing how she has embraced and been embraced by others around the world who perceive those truths without shame.
There is no navel-gazing in these stories that take us from her father’s untimely death (and her first stunned awareness that she could hear him beyond the grave) to her late mother’s skepticism that she and her daughter could communicate after her transition (and how wrong that turned out to be) to various vortexes of cultures and religions that accept death as a fact of life that does not end the soul.
Fein’s passion to communicate with her living readers shines as an honest desire to help others move through their grief and fears to an understanding that death itself is not the final word on existence.
A discussion guide ends the book with such thought-provoking gems as:
"Would you like someone to contact you after you die? Why or why not?"

No matter what the answer, I’m willing to bet it won’t be boring. Fein invites readers to discuss the most taboo topic in America, as if to say:

Title: How to Communicate with the Dead and How Cultures Do It around the World
Author: Judith Fein
Publication date: September 4, 2019
ISBN: 978-0-9884019-9-0
Publisher: GlobalAdventure.us
Distributor for bookstores and libraries: IngramSpark

Santa Fe author Judith Fein is available to give talks, workshops, and book signings at interested bookstores and for meetings and events.