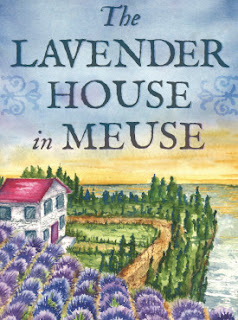 “This book will fill an important niche often overlooked in fiction and non-fiction: how Post-Traumatic Stress Disorder affected nurses in our First World War,” said Hock. “Military nurses still suffer this syndrome, making the topic more relevant than ever.”

“Freedom seldom takes us where we thought we were going.”
—The Lavender House in Meuse

Set in France, “The Lavender House in Meuse” traces the journey of Marie Durant Chagall from girlhood to adulthood; from her comfortable home in Marseille with her father and sister to the Front where she pursues her need for independence and service as a young woman; and finally to an inherited, rather isolated, country home by the Meuse River (surrounded by soothing lavender fields) where she seeks to heal, through solitude and nature, from trauma suffered in a bomb attack on her medical facility at The Front. She is not alone for long and soon finds herself caring for recovering soldiers in her new home while trying to process their pain and her own in this post-war setting.

Although the novel will be categorized as “Historical Fiction,” Noble-Sanderson has reason to believe the events actually happened, and the characters portrayed once lived. During a recent interview with book news blogger Marlan Warren (Roadmap Girl’s Book Buzz), Noble-Sanderson stated: “I believe all the characters, settings, dialogue and details are memories.”

Noble-Sanderson went on to explain that she can be in the middle of traffic, watering her garden, doing laundry or fishing on a lake, and “I will remember events, clearly ‘hear’ dialogue, and see the setting vividly in my mind.”

The Seattle-based author added: “I take advantage of those times when the flow of the story—the memories—are most vivid. Then I edit and hone the writing.”

When asked if she intended the story to be “anti-war,” Noble-Sanderson replied that acts of wartime atrocities always result in “wounds and deaths of many sorts, and scars that continue to fester and alter the character of our lives in countless ways.”

“Ultimately I hope readers will come away with an expanded understanding of what life was like for nurses in World War I,” said Noble-Sanderson. “And what the trauma of war can do to an individual, and to a nation, both culturally and emotionally.”

Sanderson-Noble will present and sign “The Lavender House in Meuse” at Village Books in Bellingham, Wash. in early November. An October launch event is also being planned at a location to be announced. 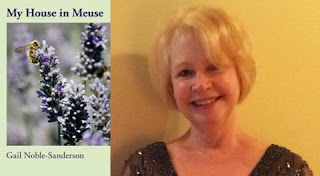 In this lifetime, Gail Noble-Sanderson has had a diverse and interesting professional career as a speech-language pathologist, educator and administrator. She was an adjunct faculty instructor and clinical supervisor at Western Washington University in Bellingham, Wash. and still occasionally lectures there.  For 14 years, she was the Director of Rehabilitation Services at Skagit Valley Hospital; and has worked with students in public schools as well as private practice. Noble-Sanderson has published educational programs for children with special needs, and now focuses on writing historical fiction. Having lived all over the U.S., she has called the Pacific Northwest home for almost 30 years.

“The Lavender House in Meuse” is her first book of historical fiction. And yes, a sequel is on the way!

Posted by Marlan Warren at 11:57 AM No comments:

MIDWEST BOOK REVIEW: "WRESTLING WITH THE DEVIL": Like finding an agate among river rocks. (Italian American Immigrant Memoir beats out the competition.) 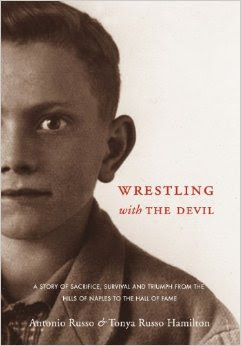 “I had an outlet for my demons.”
--Antonio Russo, “Wrestling with the Devil”

“Wrestling with the Devil (A Story of Sacrifice, Survival and Triumph from the Hills of Naples to the Hall of Fame)” by Antonio Russo and Tonya Russo Hamilton takes readers along the simple-but-not-easy path that Russo took to Honor and the fulfillment of his Destiny. The father-daughter authors give a rare "insider" view of Italian immigrant experience and one determined man's journey from his cozy Neapolitan childhood to his “Italian American Graffiti-meets-Rebel Without a Cause" adolescence in Portland, Oregon to his rather miraculous college wrestling scholarship and finally, to Russo’s successful coaching career and induction into the National Wrestling Hall of Fame.

We are treated to a slice-of-Italian-American-Life in the 50s and 60s with all the warmth and family confusion, goodwill, great food and "immigrant drive for success" that such a cultural experience often entails. What adds to this memoir's tenderness and heart, and sets it apart, is the equally touching fact that although it is told in First Person, it is actually written by Russo's daughter, Tonya Russo Hamilton, who has spun a compelling, seamless narrative in her father's voice from what must have been hours and hours of taped anecdotes.

Read more »
Posted by Marlan Warren at 11:44 AM No comments:

Amazon launches “Roadmaps for the Sexually Challenged: All’s not fair in Love or War” with E-Book KDP Giveaway (3/7-3/8): “Fifty Shades of Hot” 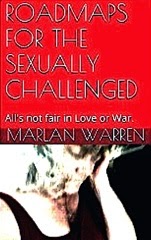 Marlan Warren is a witty, wild, highly observant writer who has her way with words. ‘Roadmaps for the Sexually Challenged’ is crazy, sad, sexy fun. An intimate look at the wild side of cross-cultural relationships and the power of the Tao.—Judith Fein, Author of “My Life Is a Trip: The Transformational Power of Travel”

On Sat., March 7 and Sun., March 8, Roadmap Girl Publications in collaboration with Amazon’s Kindle Direct Publishing (KDP) will launch Marlan Warren’s debut novel, “Roadmaps for the Sexually Challenged [All’s Not Fair in Love or War]” with a Kindle E-Book Giveaway.

“I can’t believe how fast this process moves,” said Warren. “Amazon announced it as a ‘Hot New Release in Divorce’ a few days after it was published as a Kindle E-Book. Reviews and sales are already popping up."

“Roadmaps for the Sexually Challenged” is set in the City of the Lost Angels in the mid-90s with the O.J. trial in the background. It follows the hot romance of a divorcing Jewish American woman with a Japanese American man who bears the scars suffered by his family during World War II. As both are on the rebound, the woman’s girlfriends cheer from the sidelines, but issue warnings.

“One of my favorite lines is from one of Carrie’s friends who says, ‘The mind cannot process sex,’” said Warren. “It sums up the book."

"Roadmaps" has its roots in Warren's 1994 diary entries and now stands as a “fictionalized memoir.” The veteran documentary filmmaker and screenwriter added: “The first draft was finished before there was a ‘Sex and the City.’ But it covers similar topics. The 90s produced stories of women exploring their sexual ‘freedom’ and feeling less than thrilled with the results.”

Warren credited the 70s "Fear of Flying" author Erica Jong with opening the literary door. "Jong boldly wrote about sex and made it sound like a necessary component to learning how to care for one's soul."

For those who may be Kindle-less, Amazon offers a free download app for smartphones. "And I have some excerpts on the book's blog," Warren said. "They give more plot points than the 'peek inside' option."

"The Asian man/Caucasian woman dating aspect in the book is not a small thing," said Warren. "A lot of Americans know nothing about the Asian American experience. It's rare for media to portray Asian American men as romantic leads in fiction. I tried for years with other projects and hit the wall every time in Hollywood."

Posted by Marlan Warren at 10:59 AM No comments: