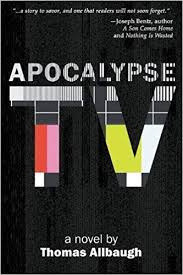 “His whole life has been a sham because he can’t accept responsibility for his failure to live by his own convictions.”—APOCALYPSE TV

Shakespeare today might muse that “All the world’s a reality TV game show, and all the men and women merely players in their quest for prizes amid layers of illusions and media hype.” It is upon this slippery platform that Allbaugh has built a metaphor for our contentious world as viewed through the lenses of good vs. evil, secular religion vs. spirituality, and love vs. indifference.

The story kicks off when Christian intellectual, Walter Terry, takes a leave of absence from his conservative college in California to visit his dying father in Michigan. Walter has just been put on notice for allowing students to express non-conservative viewpoints, and fears his job is on thin ice.

Walter and his sister are approached in a Midwestern diner by a talent scout for a new reality TV show that claims to be “an investigation into American religious ideas.” He describes himself to the pretty interviewer as an “outsider in terms of religion,” but sees her write down “soft and vulnerable.” This pigeon-holing is exactly what makes these shows maddening, but also makes them fun for the fans.

Seduced by the promise of money and his own rationalization that perhaps a show like this could use an educated analytical thinker, Walter embarks on what will turn out to be a character-building odyssey. After he is entrenched in “Race for the Apocalypse,” Walter hears the producer refer to him as the show’s “sacrificial lamb.” And after that…all bets are off.

APOCALYPSE TV gradually amps up its madness, expanding reality until it pops with an outrageousness that is not quite Marx Brothers, but a fun romp nonetheless.

Allbaugh treads a fine line between crafting a thoughtful, moving plot with three-dimensional characters and satire. He keeps the humor subtle and deadpan, in the vein of Joseph Heller’s “Catch-22,” while never straying far from the book’s serious themes which examine secular religion vs. spirituality, truth vs. fiction, loyalty vs. betrayal.

Nothing turns out to be what it seems, the innocent must suffer, guilty baggage must be unloaded, and once a gun is introduced, it must eventually be used in the finale (with a nod to Chekhov). It is Allbaugh’s incredible juggling act that keeps the comedy, drama, and religious debates lightly airborne until they come back down to Earth, not with a bang or a whimper, but with the hard truths of Life and what it means to slog willingly through it.

APOCALYPSE TV will appeal to open-minded faith-based readers, as well as those who have no affiliation with a religion or belief. It argues against the extreme notion that only members of a certain faith are favored by God, while making a case for spiritual salvation through love, faith, hope, service…and the willingness to persevere.

Even when the chips are down.

Posted by Marlan Warren at 9:25 AM No comments: