"Arrgh! certainly deserves this accolade," said Kari Hock of Green Darner Press. "Kids just love this book and Stacey Campbell is one of the hardest-working writers we've had the pleasure of knowing."

The MCA website states that its judges score each book entry on a number of elements including books that "help families grow emotionally, physically and spiritually...and are inspirational and uplifting."

Arrgh! follows the adventures of a runaway orphan boy named Christopher who gets captured by pirates posing as seamen, and forced aboard a merchant galleon that the villains plan to plunder.
Forced to pretend that he cannot speak, Christopher finds he can communicate in private with a highly skilled mouse who offers to teach him "Five Life Lessons." The Captain's daughter soon learns his secret and together they hatch a counter-plot against the pirates.

We had the opportunity to interview Campbell--who writes and lives with her husband and three daughters in the Seattle area--about Arrgh! and the Mother's Choice Award.

Read more »
Posted by Marlan Warren at 3:09 PM No comments: 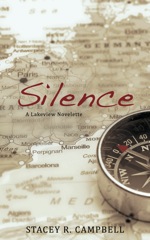 Like all the Lakeview novels, Silence emphasizes the vital importance of family and "extended family" connections. This quick, lively and poignant read explores that special longing felt by many adopted children: to know their biological parents. In this novelette sequel to Hush, Blakely Henry is now a graduate of Lakeview Academy who juggles her new life as queen of a fictional Mediterranean country with college and her hunky fiancé. Her adoptive American parents are on hand to help out, and it's touching how supportive they are of Blakely's deep need to meet her biological father.

Author Stacey R. Campbell has meticulously crafted characters who come to life on the page so well that you feel you know them. She keeps the tone light, and is unafraid of tackling painful memories or events that come up as Blakely's search intensifies. Details such as the excellent pasta dishes the castle cook can whip up for her pleasure enhance the pleasures of this story which has one foot in "fairy tale" and the other in "reality."

What makes this journey so much fun is how much everyone involved cares. Blakely's whole family plus her fiancé accompany her on this tough journey which leads them through some beautiful parts of France. As always, Campbell gives us multiple points of view, tipping us off to the Truth before the heroine discovers it--building suspense about what will happen after all the cards are on the table.

Silence is glamorous fun (how much easier our lives would be if we all had our own "royal stylist"), and at the same time, it is down to earth about skeletons in family closets and how families choose to deal with them. This is one of those sequels you can read without reading the novel that it follows (Hush); although it will make you want to go back and read the full story of how the adopted Blakely Henry came to find out she is the only surviving blood relative of an assassinated monarchy of a country that now needs her help.

Posted by Marlan Warren at 11:11 AM No comments: